Llangain Touch Rugby Training Club continues to be a long standing activity amongst the village community having been established in 1989 by founder Peter Jenkins of Plas Newydd, who remains Director of Rugby to this day.  Dai Jenkins his son has been the manager for several years.

Having gone through tough times and all kinds of extreme weather over the decades, the club is more popular today than ever.  The regular squad of about 45 with ages ranging from 14 years old to 60+ train on Sunday nights on the 4G surface at Richmond Park in Carmarthen at 7pm.  All are welcome to join with the cost being £20 for 10 weeks or £3 per session and only £1 for under 18s.

In April 2018, the team won the Wales Touch Rugby Championship held at the Wales Millennium stadium in Cardiff.  Along with the many social occasions and the annual end-of-season Christmas dinner, the team organise a bi-annual rugby tour to one of the competing countries during the Six Nations Rugby.

Come along and get involved! 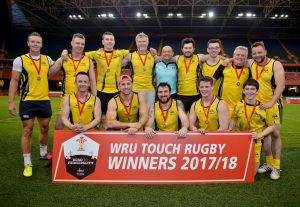 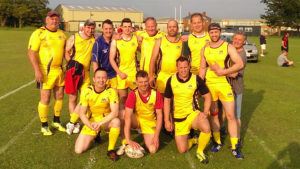